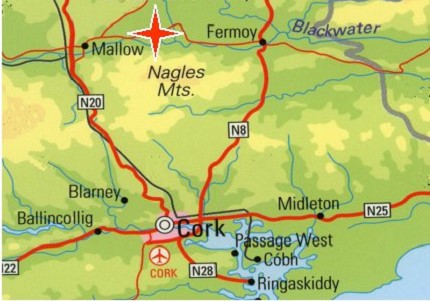 Nano Nagle was born in Ballygriffin, Co Cork, Ireland in 1715 to a wealthy family. www.nanonagle.org
They were dark days in Ireland during penal times when culture and religion were threatened. Nano loved the carefree life in the country on the banks of the Blackwater River and in the shadow of the Nagle mountains.
​It was here that unbeknown to her she was being prepared for a life of courage and daring, surrendering herself to the spirit of God to alleviate the pain and suffering of her people in Ireland.
The penal laws brought great poverty and misery to Ireland and after an education in France Nano eventually returned to Cork and at great personal risk, established schools for poor Catholic children deprived of education because of their religion.
As her health failed she was anxious to ensure her work continued after her death and so founded the Presentation Sisters of the Blessed Virgin Mary. www.pbvm.org 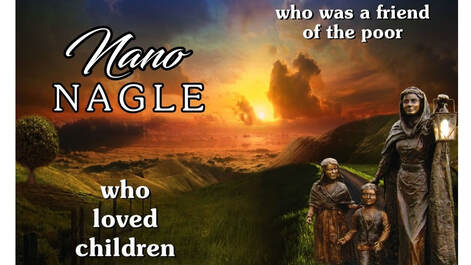 Nano: In the face of danger ..........
Drawn into deep contemplation, Nano's life experiences a profound awakening. She was radically changed. Stepping away from and leaving behind the comfortable nest of position and privilege, Nano deliberately moved, in the words of Pope Francis, to the 'peripheries' and 'frontiers' of the Cork of her day. She aligned herself with the 'caravan of the peoples', the poor of the city, who daily trudged its winding lanes and filthy hovels.
​
Entering into communion with people who lived in conditions of rampant hunger, disease and ignorance, she spent herself for the poor.
​In Dr Coppinger's Panegyric in 1774 he wrote:

​             How often have we seen her, after a well spent day,
returning through the  darkness of the night,
dripping with rain mingled in the bustling crowd,
moving thoughtfully along by the faint
glimmering of a wretched lantern, withholding from
herself in this manner the necessities of life to administer
the comforts of it to others.
​
Nano became a prophetic, pioneering, courageous, daring voice for people who had long been in the throws of despair and hopelessness, due to intolerable, unjust, and oppressive systems. Now, entirely at the disposal of God alone, she became the Woman of the Lantern, whose words give voice to the voiceless and whose actions beam light into hopeless places. she becomes a wonderful agent of change and transformation for the people of her day and by the enduring power of her inspiration, for our world too.
"Praying our Journey"

A series of 'disorienting dilemmas'
become the catalyst for the radical
awakening of this young woman.
they would move her (Nano Nagle)
out of a small and privileged world
into a world impacted by injustice
and discrimination.
it is said God turns up incognito.

The Icon of Nano Nagle
With symbols that touch upon our most ancient past Desmond Kyne's Icon tells an inspirational story of one of Ireland's greatest women and her heroic leadership in penal darkness. The Icon speaks to each person in its own way.
As Desmund Kyne emphasises in the icon, Nano dared to let herself be led by the Holy Spirit. The Icon explains her enduring influence, and her extraordinary relevance for today's world. (Desmund Kyne and Michael Ledwith)
Words are unnecessary.
Allow yourself to come to know this remarkable woman as you ponder each page of the Icon. 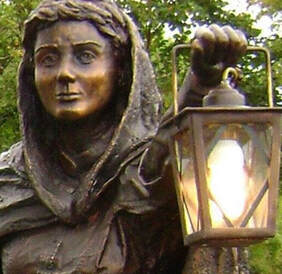 Nano Nagle:
A Poem by Edwina Gateley  in honour of Nano being made Venerable 2014
You didn't have to live like that Nano.
you didn't have to spend your days and countless nights
​ seeking out "the least" --the little ones,
clad in rags, sniffling, dirty and ignorant in the slums and dark corners of the city.
No normal person, Nano, would go to such lengths to love.
But you were not normal, Nano.
You were possessed and driven by God--calling you into A Great Love-Conspiracy-
to make a difference in a hurting world,
leaving all of us, timid and doubting souls, with a legacy of miracles -
born and forged from your courage, determination and deep hidden suffering.
what divine seduction led you, Nano, to turn from wealth, privilege and comfort
to take an untrod path with the poor, the homeless and the uneducated?

What kind of love affair? discipleship gone mad turned your life around,
propelling you from light, glitter and glory into darkness, terror and pain?
Your first response to the horror of utter poverty,
was to enclose yourself within safe convent walls in France to pray for the poor souls who had filled your heart with pity and compassion.
​But it was not enough.
You succumbed, Nano, to the Love-Conspiracy,
the whisper in your soul which would not let you rest --
safely ensconced within the convent walls.
Reluctantly, yet with a deep inner knowing of certitude
you returned to Ireland and your birthplace in Cork.
It was a violent and dark time in Irish history.
Your people were living under the ruthless oppression of a brutal Penal Code
which deprived them of their land and human rights,
leading to desparate poverty and wide spread misery.

But your family -- of noble heritage-- were rich and privileged, Nano.
You could have simply become a generous philanthropist --
handing out food and alms from behind your secure, warm walls.
that would have been safe, commended, and applauded as generous ----
but it was not enough, Nano,
for the insatiable Conspiracy of Love which had seized your soul and led you later to declare:
"Spend yourself for the poor." ​ 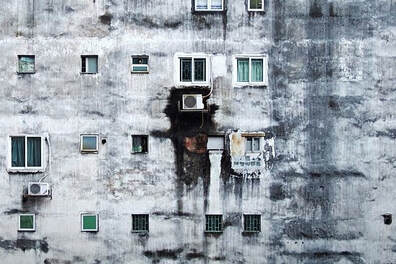 ​So you began to steal out from your lovely home,
gathering the children from their hovels and their dark and dirty corners,
setting up secret schools to teach reading, writing and religion,
honouring the fundamental right of all to education.
It was a dangerous business, Nano.
Penal laws denied Catholic education
and those who violated the harsh Penal Law could be severely punished.
But you were driven by a far greater law, Nano --
​love one another, no matter what; no matter what.
​And so you continued your mission, against all odds,
and in the face of the fear and horror you saw all around.
Eventually, supported and financed by your family,
your schools grew and multiplied,
offering education, alms and hope to hundreds of children.
but hostilities and criticism also grew and multiplied.
Many perceived your work as a danger and a threat
that could bring down retaliation of the Catholic population from their Protestant oppressors.
Undeterred, Nano, you responded:
"the best works meet with the greatest crosses in the beginning. We must expect to suffer."
And indeed you did, Nano.
Tirelessly, constantly, you visited and taught in every school,
your TB wracked body surrounded by the
nauseous smell of the rags and the unwashed bodies of the children you came to love.
After school you visited the old, the sick and the hungry in their disease-ridden slums,
returning, as night fell, clutching your lantern, to pray in the small mud hut that was now your home.
There you prayed, Nano, hour after hour,
the pain of your sickened body eclipsed by the ardent passion of the great Love-Conspiracy
that kept your soul shining in the darkness- sole witness to your whisper:
" The Almighty is all sufficient ----"
But in the silence of your vigil you came to know, Nano,  that you could not continue alone.
your great service of love needed the hearts and hands of others
-----and so began the community of dedicated women,
known today as the Sisters of the Presentation of the Blessed Virgin Mary.
your life and legacy, Nano, carried into the future --
the light of your lantern now shining through the centuries.
Blessed are you, Nano, lover of the poor and lost,
Blessed are you!
May your sisters continue to shine your light in dark spaces,
​ loving one another, and keeping alive -
Your Great Conspiracy of Love.
The Mission of Jesus
The Spirit of the Lord has been given to me ----------(Luke 4:18)

The course of Nano Nagle's life was shaped by this same Spirit.
God's Spirit led her through uncertainty and failure
to an ever clearer understanding of her mission.
that understanding enabled her to to take steps to liberate the poor from ignorance and injustice.
Children's Views
Copyright 2020
Proudly powered by ​Weebly